Since last week new features and updates are available. We would like to inform you about the news and introduce a new team member.

Since many international customers use our tool, we have added additional languages to German, English and French. The selection of languages will be continuously extended, so that in the future also Mandarin, Turkish and other languages will be available. Besides the three languages mentioned above, we currently also offer Spanish, Italian, Dutch, Polish, Portuguese and Russian. The languages can be selected in personal user settings.


Surveys at role and device level

In addition to departmental surveys, it is now possible to control surveys at device and role levels. Surveys can now only be addressed to employees or managers. In addition, there are various combinations that go into more detail.

In addition, surveys at device level can be delivered. This is particularly interesting for terminal users. Thus, a survey can only be sent on terminals (tablets with our terminal app). This is well suited for surveys in company meeting rooms, for events and in restaurants.

Our survey system will soon be extended by the possibility of using, copying and editing ready-made questionnaires for surveys in addition to questionnaires you have created yourself.

Our new apps for iOS and Android will be launched mid of february 2019. The new app will contain a dashboard, a mood rating, a message box and all settings and will replace the currently available older apps.

After the first version an update will bring the chats and surveys into the app.

For all users without an email address, the app will have a special opportunity to participate in CompanyMood in an update. More about this in the next newsletter.


Reinforcement for the CompanyMood team

Since October last year, Stephanie Wörz, M.Sc. psychologist, has been supporting our business development team in the scientific validation of our tool and the creation of ready-made surveys. Steffi is also able to assert herself outside of technical discussions because of her her second black belt in karate.


We are always happy to receive feedback on our updates. The CompanyMood team wishes everyone a lot of fun with the new functions and updates and a successful time!

View all posts by Stephanie Wörz
How meaningful is measuring employee satisfaction with just one question?
Corporate culture: 8 steps to successful change 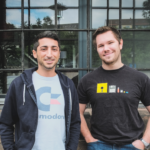 How CompanyMood facilitates the risk assessment of psychological stress

Any cookies that may not be particularly necessary for the website to function and is used specifically to collect user personal data via analytics, ads, other embedded contents are termed as non-necessary cookies. It is mandatory to procure user consent prior to running these cookies on your website.